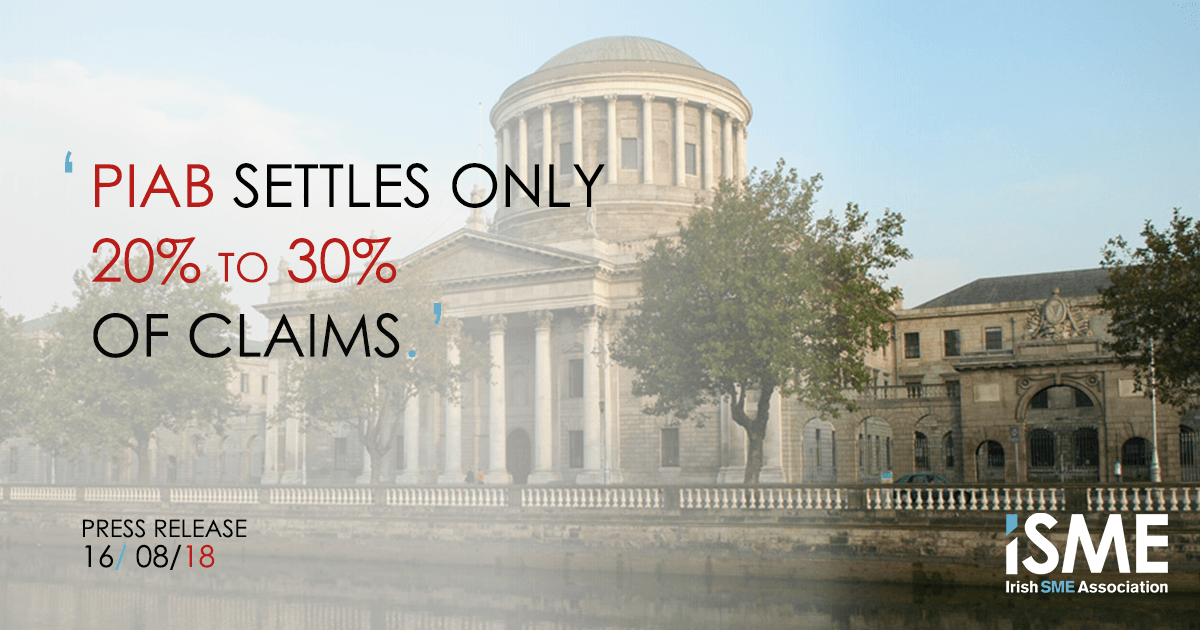 According to the Cost of Insurance Working Group (CIWG)

ISME gives a cautious welcome to the announcement by Minister Humphreys of the publication of the Personal Injuries Assessment Board (Amendment) (No. 2) Bill 2018. However, we note that the proposals made in this Bill do not go remotely far enough to ensure that the majority of claims are dealt with by PIAB, rather than in court.

Since legal costs account for approximately 46% of the amounts settled for in court, it is imperative that the number of cases settled within the PIAB system is increased drastically and quickly. By not introducing ‘moral hazard’ for claimants refusing to use the PIAB system, claimants will continue to go to court unnecessarily.

The Minister’s original proposal to amend Section 25 of the PIAB Act has been mysteriously removed. The proposal was recommended by the CIWG in their January 2017 report. This amendment required a court to take account of a claimant’s failure to comply with requests for evidence of special damages and requests to attend medicals. Since genuine claimants will not be deterred or inconvenienced in any way by the original proposal, it is reasonable to ask the Department who exactly lobbied for its removal, and for what reason. ISME suggests that we are also owed an explanation as to why the Department would agree to remove a sensible legislative proposal made by the CIWG.

The Bill entirely fails to introduce moral hazard for claimants who unfairly or unreasonably refuse a PIAB assessment, and take their claim to court. Currently, a claimant who rejects a PIAB assessment for, say €10,000, and takes their case to court and is awarded €10,001, will succeed in the recovery of costs, because their award is greater than the PIAB assessment. This is absurd. It will not encourage the settlement of claims within the PIAB system. Since legal costs in personal injuries cases routinely amount to 46% of the quantum of award, ISME suggests that the Bill explicitly provides that defendants should not have to foot costs unless plaintiffs proceeding to court succeed in trumping their PIAB assessment by 46%. ISME has previously estimated the cost of legal fees in the personal injuries industry to be in the region of €350m annually.

Thirdly, while we acknowledge that revision of Book of Quantum awards is a separate thread of reform, the PIAB Bill does provide for regular its updating. In the meantime, Mr Justice Nicholas Kearns of the Personal Injuries Commission has reported to the Minister on his bench marking of Irish awards against those in peer jurisdictions. His report has yet to be published, but we understand it will state that Irish awards are 4.4 times higher, on average, than those in other countries. The PIAB Bill should therefore pave the way for capping general damages. The constitutionality of doing so is already firmly established by the Supreme Court in the Sinnott .v. Quinnsworth Limited [1984] decision, and in statute by Section 49 of the Civil Liability Act 1961.

Finally, ISME has long campaigned for a statutory offence of perjury, and for the submission of claims to PIAB to be sworn under affidavit (or an equivalent statutory declaration). The reason this is necessary is because, at present, claimants only swear an affidavit of verification when they refuse a PIAB settlement and take their claim to court. The claim presented in court is usually materially different to that presented to PIAB. This temptation to present a false, exaggerated, or simply more serious personal injuries claim before a court would be radically reduced if claimants were required to swear its veracity at the start of the claims process.