A two day Luas strike will affect 90,000 commuters this Thursday and Friday

These are the voyages of the Starship, Enterprise

To seek out new life and new civilizations

To boldly go where no man has gone before”

@luas lines are deliberately routed through major population centres. We have failed to spot the isolated areas on the map below. 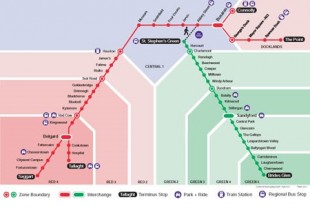 The Irish Times article continues…“We are portrayed as people who just push a lever back and forth. However, the actual job itself is involved and can be quite complex. There is quite a complex signalling system. It is the driver who operates the points; they are not automatic. Mr McCarthy argues that the salary scales, which run to about €42,000 after nine years, do not reflect the remuneration required for the role and responsibility of a Luas driver…

Martin Wall continues…Luas staff are seeking increases of between 8 and 53 per cent, claims which have raised eyebrows across the industrial relations and political worlds. Pay movements in the private sector range from 2-3 per cent on average.

@csoIreland figures show the average industrial wage in Ireland is €35,776. According to @GradIreland a primary level teacher with an honours degree can expect to earn around €39,000. Greed destroyed our economy along with 300,000 jobs. Ludicrous wage claims, backed up by even more ludicrous justifications, have to be resisted.